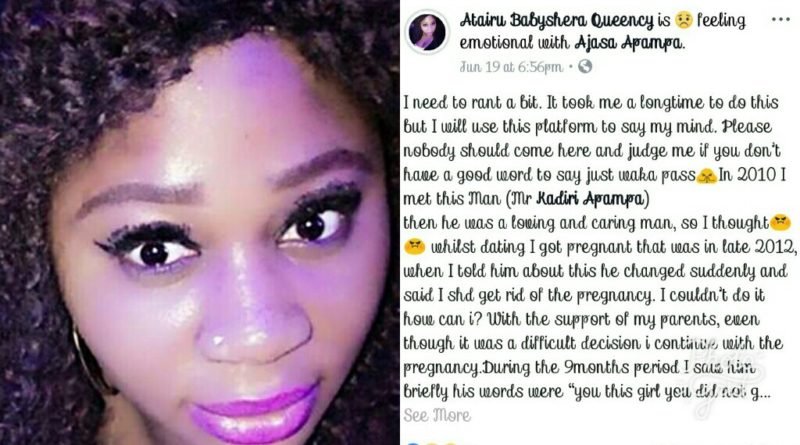 The Facebook user, Attairu Babyshera Queency called out her baby Daddy, Kadiri Apampa for asking her to abort their baby few years ago.

According to her, the incident happened way back in 2012 after she found out she was Pregnant for her baby Daddy. Excited to be pregnant for her man, she told him but instead he insisted she go terminate the baby as he wasn’t ready to father her child.

She said he had kids from a previous marriage but refused to take care of her while she was pregnant and even after her delivery.

In her words, she wrote;

I need to rant a bit. It took me a longtime to do this but I will use this platform to say my mind. Please nobody should come here and judge me if you don’t have a good word to say just waka pass🙏In 2010 I met this Man (Mr Kadiri Apampa)
then he was a loving and caring man, so I thought😡😡 whilst dating I got pregnant that was in late 2012, when I told him about this he changed suddenly and said I shd get rid of the pregnancy. I couldn’t do it how can i? With the support of my parents, even though it was a difficult decision i continue with the pregnancy.During the 9months period I saw him briefly his words were “you this girl you did not get rid of the pregnancy.” i also received some calls from the so called family members abusing me and telling me to get rid of the pregnancy. I turned a deaf ear and I gave birth to a beautiful baby girl in October 2013 -Misturah Apampa. It was a difficulty moment for me. I tried so many times to have him in our lives all prove abortive, he never show concern. He has grown up children he mentioned their names when we were together Toun Apampa, Yemisi Apampa, Tope Apampa, Segun Apampa , Kemi Apampa. He showed me all their pictures None of them contacted me
( thats if they even know about my daughter). I called him last month to please assist me with my daughters school fees all he could tell me was that OMO YEN TI NEED ABURO ( The girl needs a sibling) IMAGINE. I lost my mother to all this problem May her Soul R.I.P. At the end of our conversation last week he said I should look after my child by my self. This man has not spend any kobo on the girl since she was born and she’s going to be 6 (Six) this year.
Mr Kadiri Apampa I pray to God to spare your life for you to see the wonders God will do in My daughters life. I know God will not forsake me if you have .
You took advantage of my tender age and I am here dealing with my self. God will judge us all.
N.B he’s divorced and promise me heaven and earth Some Men hmmmmm………. 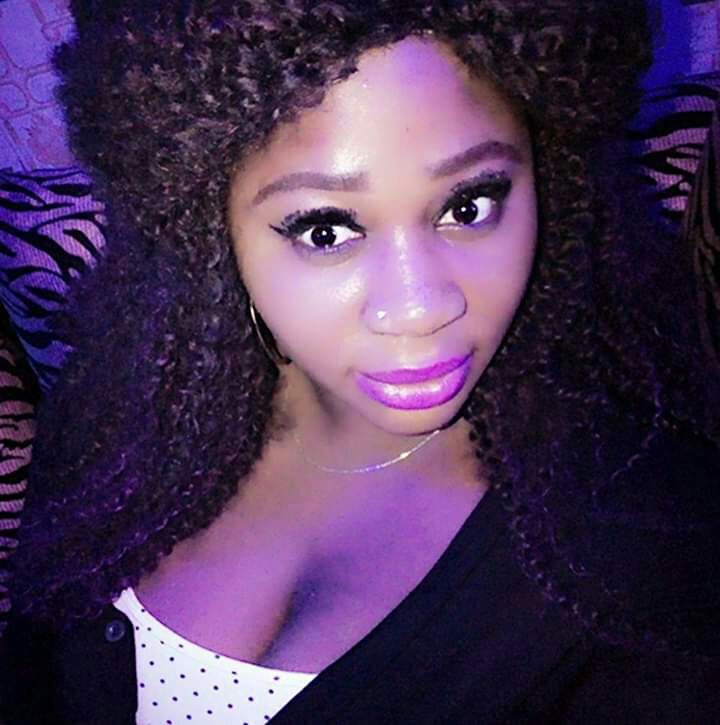 Girlfriend exposes her man’s chat after he denied her pregnancy

Bobrisky replies fans who blasted him for using a motorcycle. 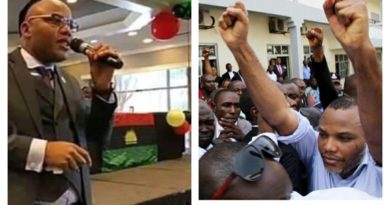 “You won’t make heaven if you hate Biafra”– Nnamdi Kanu 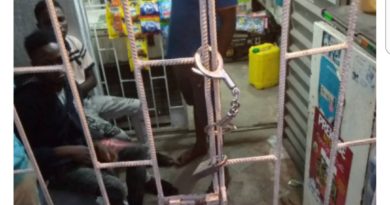